This week article will be upon one big and not so famous prejudice! Perhaps, one of the biggest made upon animals in human history.

My first is deeply rooted in the pre 70's culture, thanks to Mister Spielberg; my second is, probably the most feared aquatic animal of the planet; my third is that he kills in fact less than a deer…

You guessed it : SHARK!

Presented as ferocious killers, partly due to the famous movie « Jaws », sharks have been demonized as one of the most dangerous predators of men in our planet.

They actually kill no more than around 6 to 15 people per year in unprovoked attack; mainly because they mistook their target for a sealion.

In comparison, human kills in between 63 to 273 million sharks per year, which is close to being genocide, consider that they kill mostly to feed and to survive.

To give you an idea,

For his defense, the creator of Jaws, Peter Benchley is actually one of the shark’s greatest defender.

Preconception #2: Sharks are not useful!

Because of the ladder, we tend to think that sharks are useless or that they only contribution to our planet would be limited to  “killing”. Which is actually a big prejudice for we tend to forget about them and kill them without being aware of the incredible animal they are.

In fact, sharks have a huge role in the ecosystem. For instance, a study in Australia showed that their presence help protecting the coral, as so for the balance of marine ecosystem by limiting the amount of mesopredators —of medium size— and help smaller species to become more abundant.

This massive killing of sharks could have a dramatic impact on the marine ecosystem as they are on the top the foodchain, with a non negligeable domino effect if we take them out — and therfor important to point out in this forum.

Millions of sharks are killed for their fins, to hide drugs such as cocaine, in Costa Rica; In chinese medicinal for some virtues and in occident, to create caps to help cure cancer, which has even been showed wrong  as it appears that it isn’t good for your body, it could even encourage disease such as Alzheimer, Parkinson and other disfunction as it exposes people to Neurotoxic BMAA.

Check out a video here :

Thanks to the online magazine « Brut » that enlighten one of the most detrimental human actions during the last decades.

If you want to support more of sharks defender : I suggest you follow this page on facebook @Sharwater

Other Articles on "Animals" 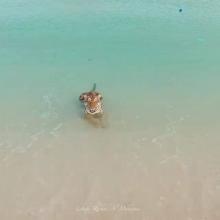 Did you know tigers liked to swim?